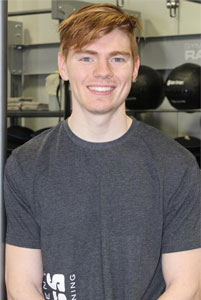 Josh’s Story…
I haven’t always had a passion for fitness. I have however always been one of the top athletes in my class throughout my entire schooling. I’ve always prided myself on being “naturally athletic.” In high school, I received numerous awards and accolades for soccer. Including being named All-Ohio First Team. I thought I was on top of the world. It wasn’t until college that I experienced my reality check. My family and I through extensive thought and discussion decided that it was in my best interest to not pursue college athletics, and attend Kent State University. While there, I did participate in club soccer. While I thought this would be intense and competitive, I quickly found out I was wrong. Our practices were laughable at the minimal effort that was put forward, and it showed when we had games. While the talent of our team was excellent, we lacked discipline and that competitiveness that I craved. After a year I decided that I needed athletics to be a part of my life again. I needed that drive and grind. The following year I transferred to Malone University, a college that I originally had looked into attending after high school. My first year I played a lot more than I had expected to coming in. In fact, all 3 years that I played at Malone I was top 5 among my teammates in minutes played per season.

The biggest challenge for me was adjusting to the training. Training was intense. It wasn’t until I had a serious conversation with my conditioning coach that I realized I needed a change. The most significant factor wasn’t the effort I was putting towards training, but all of the factors aside from it. My sleep, nutrition, and hydration were the biggest influencers of how negatively I was feeling during my training. After making significant changes, I saw significant results. It amazed me how seemingly insignificant these factors were but what an impact they had on me! This is why I wanted to become a trainer… Change is possible.

In our world of social media, we all want to make enormous changes to our lives, not realizing how hard they may be! I see people time and time again start a “diet” or a “workout plan” and get burned out after a month or two. What I want to teach clients is that it’s not necessarily the big long term changes that make a difference. It’s the small, day at a time, changes that add up! I want to share my passion, and challenge everyone to be the best version of themselves each and every day.