The US government is trying to boost the public’s awareness of what we’re consuming. They are finally recognizing that serving sizes have changed, sugar is lurking behind nearly every processed food ingredient list, sodium is out of control, and fat isn’t always the enemy. That is why the Food and Drug Administration has taken a look at some of the key issues concerning America’s health today and has made several revisions to the nutrition labels on packaged foods. It’s hard to say whether or not these changes will significantly impact the way that most people purchase and eat their food, and it’s a small step in the right direction, but if they’re trying to change the American diet they’re focusing on the wrong issue.

According to the Federal Register, the official daily journal of the US Government, the FDA recently ruled on the updated nutrition label this past May 2016, stating, “The updated information is consistent with current data on the associations between nutrients and chronic diseases, health-related conditions, physiological endpoints, and/or maintaining a healthy dietary pattern that reflects current public health conditions in the United States, and corresponds to new information on consumer understanding and consumption patterns.” It seems as though they’re finally catching on to what we see day in and day out and making an attempt to help solve the problem. So what exactly is changing? Here’s a quick list: 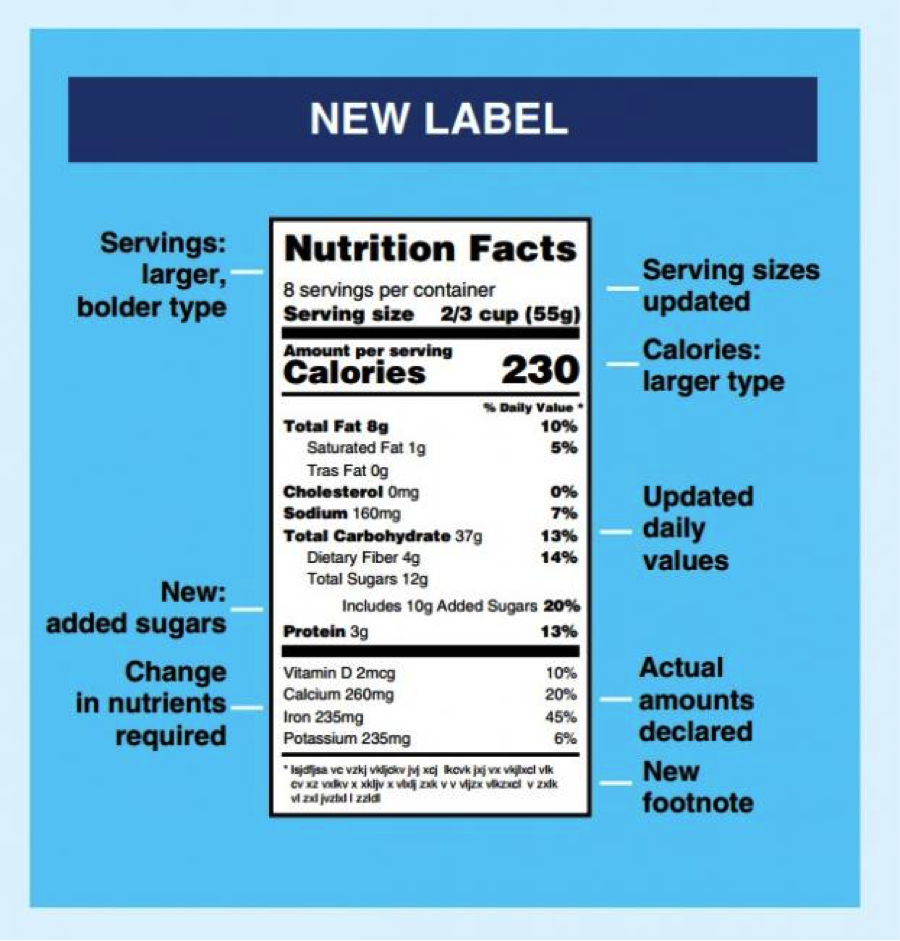 Did you notice, as I did, the unusually high recommendation for added sugars? Just added sugars alone is suggested to be 50 grams or 12 teaspoons of sugar. The American Heart Association suggests 6 teaspoons for women and up to 9 teaspoons for men, but not 12. Not only that, but even though the sodium level has also been cut back, it’s still on the high end of the AHA’s recommendation of 1,500-2,300 mg. And will the adjusted serving sizes truly change the amount that people consume when they are already eating those amounts anyway? For as much as it appears to be an improvement, I have little hope that the new nutrition label will make much of a dent in the overall health of our nation. The difficulty isn’t in what’s printed on the package; whether it lists sugar, sodium, added vitamins, servings, calories, or anything else for that matter. It’s what’s in the package itself that I am concerned with. Our focus should not be on labeling and scrutinizing highly processed junk food, but on encouraging a diet full of real, whole foods, because eating more real food eliminates the need to be concerned about nutrition labels in the first place.