Iodine deficiency was a common nutritional deficiency before the 1920s. It was after the introduction of iodine into salt (making iodized salt) that this problem was mostly solved, however, not fully resolved. Iodine is important to the body because of the role it plays in the production of thyroid hormone. It is also obtained only through food (cheese, yogurt, milk, eggs, iodized salt, shellfish, seafood, soy milk and soy sauce). Our bodies do not produce iodine. Therefore, if a person is not getting enough iodine through food, the body will not have enough to produce thyroid hormone. 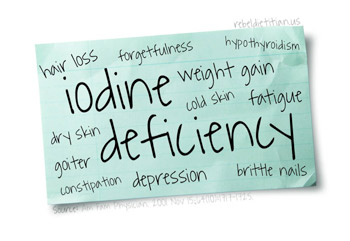 Thyroid hormone is the regulator of the body’s metabolism, energy production, growth, and brain function in children. The thyroid gland absorbs whatever amount of iodine is available in the body, so intake of iodine is crucial. If too little iodine is taken in through one’s diet, hypothyroidism is the result. Symptoms of hypothyroidism include: goiter, loss of energy, slowed metabolism, weight gain, tiredness, sensitivity to cold, slow pulse, brittle hair, and difficulties concentrating. Appropriate intake of iodine is especially important for pregnant (and nursing) women because of the effect that it can have on children; too little iodine can cause mental retardation and growth problems. The recommended daily amount for adults is 150 µg and for pregnant women is 220 µg. If you do have hypothyroidism, don’t be fooled into thinking that the more salt you eat the better. According to the Harvard Medical School’s Harvard Health Publications, “Cutting back on salt is generally good for the heart and arteries. But could this strategy have the unintended consequence of making some Americans deficient in iodine?

That’s not likely, because salt provides only a fraction of daily iodine intake for most Americans. Between 75% and 90% of sodium in the average American’s diet comes from prepared or processed food, and most food companies don’t use iodized salt.”

Though too little iodine can be a problem, so can too much. An already overactive thyroid, in addition to too much iodine, can worsen hyperthyroidism. Hyperthyroidism shows symptoms such as weight loss, increased heart rate, goiter, and bulging eyes. People may like the idea of having tons of energy, weight loss, and little need for sleep, but this is not healthy by any means. There are several causes for hyperthyroidism. One form (Graves’ disease) tends to run in families, while another is a type of autoimmune disorder, and another can be caused by a viral infection. An additional form of hyperthyroidism, iodine-induced hyperthyroidism, is a result of people who are iodine deficient suddenly increasing their iodine intake by larger amounts. The iodine deficient body becomes very good at working with less than appropriate amounts iodine and when greater amounts are introduced, hyperthyroid symptoms may occur. The best technique for those who are iodine deficient is to slowly increase their intake over time to prevent this form of hyperthyroid, while ensuring that the problems of hypothyroidism are reversed.

How can you find out if you have an iodine deficiency (hypothyroidism) or hyperthyroidism? Since iodine is released from the body through the urine, the best way to determine iodine deficiency across a large population is to measure the amounts of iodine in urine samples. Hyperthyroidism is determined by a simple blood test, which will show if your thyroid hormone levels are too high in your body.