“A strong butt is the key to a happy life.” That’s an odd quote to live by, but to run by, there may be nothing so true. The gluteal muscles are the powerhouse of every runner, or at least they should be. When a runner’s glutes don’t do their job, everything else will eventually fall apart. Lately in the runner’s world we have been hearing lots about foot strike – mid-foot, forefoot, or heel-strike. And while the way your foot hits the ground is important, it won’t do anything for your form if your hips are off. When you watch an elite runner in a race they appear to be running effortlessly and with such ease. And you know what I’m talking about because you’ve either seen realllly bad running form on the sidewalks in Canton or you’ve seen yourself running and wondered “what am I doing wrong?” Foot strike should be the final link in the chain of good running form, which involves the shoulders, arms, hips, and feet. The key link in the chain, though, is the hips.

The hips are the fulcrum of the body; driving the legs and upon which our core is balanced. One of the major problems with form comes from overstriding, or running with the legs in the front instead of behind our center of gravity. Pelvic proprioception is what runners need to learn. It requires learning where your body is at and correcting it, not just performing an exercise and hoping it fixes the problem. The first thing to do is to think of your pelvis as a bowl of soup. As one of my Malone Cross Country coaches told us “Don’t spill the soup!” Many runners run so that the “soup” spills out the front, with their pelvis tilted anteriorly because of tight/shortened hip flexors, which also shorten your stride. 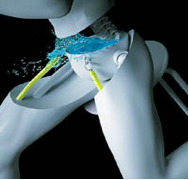 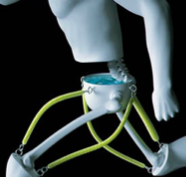 A static kneeling hip flexor stretch is good for stretching your hip flexors, just make sure to keep that pelvis rotated back. Hold this stretch for a minute or more each day. Then think of running with your hips stacked under the torso. When you achieve this hip posture, you avoid twisting the hips forward and arching the low back.

There are a few exercises you can do to activate your glutes and become aware of the way that they are intended to work to help get the pelvis in the right position. (see the diagrams below.) The first is a glute bridge. This is a pretty common exercise at IronFitness. When you are doing the glute bridge you should feel the majority of the effort coming from your glutes, not your low back or hamstrings. If this isn’t the case, change the position of your pelvis by squeezing the glutes. The second exercise is the standing hip extension. Stand with one leg bent at 90 degrees so that your tibia is parallel to the floor. Holding your hands on your hips punch the raised foot and leg backward toward the wall without rotating the hips or arching the low back. Your glute should activate and you’ll feel a stretch in your hip flexor. It is important for exercises, like the ones mentioned, to become a regular part of your exercise routine if you are a runner. Doing them irregularly will not give your body the awareness it needs to activate those glutes when it counts most: during your run or race.

In addition to perfecting pelvic proprioception, there are two other areas of form that runners often struggle with: cadence and arm movement. The best runners will take between 180-200 or more steps per minute. If you are getting in less than 160 you aren’t being very efficient. Either your stride is way too long or you’re doing some kind of hopping (more or less). A simple way to test your cadence is to take a look at your watch for 10 seconds during your run and count each step that you take. It should land somewhere between 27-33 steps. This isn’t exact but it will give you a good idea of where you are (and is much easier than counting 180 steps in a minute!)

So now what do you do with those arms? A lot of inefficiency in running comes from poor arm movement: crossing the body, too much forward swing, or not enough. The goal is to get the elbows back and drive with the backward swing of the arms, not forward (contrary to what you might have thought). Tight chest muscles and shoulders can be a limiting factor, so stretching out the chest and shoulders is a good idea. Try lying on a physio ball or foam roller on your back (upper back and head supported) with knees bent and feet on the floor and allow your arms to open up to each side with palms facing upward. Stay in this position for several seconds, working up to several minutes. Then slowly come up and practice some rowing exercises, such as bent over rows focusing on squeezing the shoulder blades together. 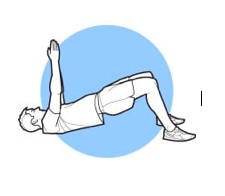 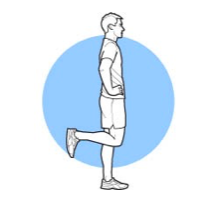