Hannah Alderfer, BA, CPT, FMSC, & in control of her genes!

Recently I watched the first episode of a show created by PBS called 9 Months That Made You. It was all quite interesting as it broke down the first hours, days, and weeks in which a person is formed. It only took a few minutes into the episode, however, for one bit of information in particular to stand out to me. It’s called epigenetics and it’s a concept that’s changing the way we think about disease, lifestyle, and the longevity of life.

What exactly is epigenetics? It means “control above genetics” and it studies how environmental signals influence how your genes are expressed, meaning what instructions they give the molecules that make up your body. In 9 Months That Made You, they follow the research of an incredible 70-year study in Gambia, Africa. According to Dr. Matthew Silver, a scientist for Britain’s Medical Research Council, doing such an extended study about life expectancy in one particular area, gives evidence to the impact that a mother’s diet has on her unborn child. The study has shown that, “Babies conceived during the dry months are seven times more likely to die in young adulthood than those conceived when it’s wet. And this extraordinary difference may be all down to what a mother is eating during the very first week of life in the womb.” Did you catch that? The very first week! The mothers who were able to consume a more nutrient dense diet during the rainy months, when lots of leafy green vegetables were available, had children whose immune systems were stronger and therefore able to fight off infections and diseases later in life. In other words, genes that affect the immune system were “turned on” by better nutrition. Amazing! The show goes on to say, “We used to think that the genes we inherit from our parents are fixed, but the latest science shows us that this isn’t entirely true. In the first days after conception, some genes are switched on while others are switched off. And the mother’s diet of green, leafy vegetables provides a cocktail of nutrients that bind strands of DNA, which forever changes how some genes work. And this permanently affects how the body is built.”

Now, just because your mother maybe didn’t eat well during her pregnancy does not mean that all is lost. When the Human Genome project was started in the 1980s and finally wrapped up in 2003, they discovered far less genes than they had predicted, which meant that something else was accounting for the vast differences between each individual. A recent article featured by the Idea Health and Fitness Association states, “With scientists exploring factors beyond genes, an understanding has emerged that our thoughts, emotions, nutrition, lifestyle choices and stress management all send signals that determine whether genes become active or lie dormant. This upends the notion that our genes predetermine our health and we must accept our parents’ or grandparents’ fate regardless of our own choices.”

It makes even more sense to take seriously the statement made by the father of medicine, Hippocrates, nearly 2000 years ago, “Let food be thy medicine and medicine be thy food.” Poor nutrition combined with environmental pollutants, chemicals you are exposed to on a daily basis, and the physical and emotional stresses you endure regularly can create quite the challenge for your body to fight against. It’s no wonder that so many of us are sick today. Your choices truly do impact your health; don’t trust in good genes alone. Conversely, just because you have a family history of a certain disease does not mean you are destined to inherit it! You can change your future, because your genes do not necessarily determine it for you. 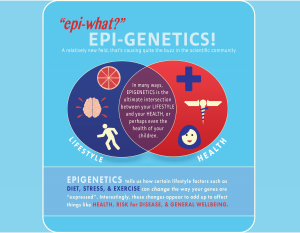